The sounds remind me of my slot car sets when I was a kid.
I can't wait for electric street racing to start happening all over the US.
Perhaps that might be a good use for 50 or so of the Mini-Es. 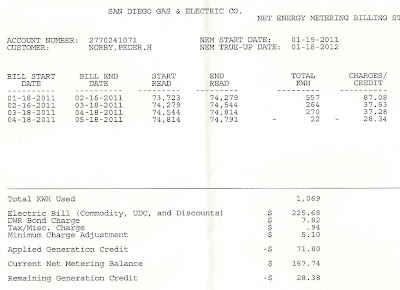 What a fantastic time we are living in regarding the evolution of energy and transportation. Of all the great advances of our time, I would suggest that the ability for the average family to power their home and their transportation by electricity generated from the sun ranks as #1.

The ramifications of this for our nation is staggering in its consequences as we redefine our relationship with nature, with our utilities, with domestically produced energy, with an improved healthier environment, and perhaps a new definition of strategic national interest that has as less of a priority, securing safe production and delivery of imported oil.

This is my favorite time of the year. As the sunny days get longer, around April 20th we dipped below the zero cost line for our home electrical energy and 15,000 miles a year driving in our Mini-E. To think we actually get paid a credit for over production and driving for the next 6 months.

Try going to a gas station and see if they are willing to pay you to put their gas in your tank.

That is exactly the life of a solar powered zero energy home and an electric car such as the Mini-E or the ActiveE.

This month our bill was a credit of $28.34 and this will grow slightly in the coming months. Beginning in mid October as the days shorten we will slide back above the zero line for the remaining 2-3 months of the year.

At the end of the year, +-$0 is the energy cost to power the home and the Mini-E.

‘When going forward, a rear view mirror can be most helpful’ Peder Norby

Electric vehicle charging and the lack of local, regional and national, EVSE infrastructure is a well documented area of concern among those considering an EV. A look at our history reveals no need for worry, that the path of EV development, mirrors exactly the early path of the gasoline powered automobile.

“If you think this is just an interesting piece of trivia, you’re likely not ready for the MINI E, the BMW Megacity or any other EV, for that matter. But if you consider this fact to be a powerful parallel, a bigger charge from your driving experience is fast approaching” This according to Mark Hacking in his article Mini’s Electric Future.

Let’s start with the gas car.

Karl Benz was granted a patent for the two stoke engine in 1879. Benz demonstrated the first gasoline car powered by an internal-combustion engine in Mannheim, Germany, on 3 July 1886. It was called the Motorwagon. From 1886 progressing to 1908 dozens of manufacturers produced low volume runs of the gasoline car in many derivatives, primarily for the wealthy few that could afford such luxury.

On September 27th, 1908 the first Model T rolled off the “assembly line” and the auto era burst onto the scene, with the car now affordable to the masses. In the early years between 1879 and 1908, a driver would have a 50 gallon drum of petrol, kerosene or ethanol (home made ethanol)at home. The driver could go as far as their tank would allow and back home again. The early cars had a range of between 20 miles and 100 miles depending on the model. With the Model T that grew to 150 miles. I wonder if those early drivers had range anxiety?

Around the turn of the century many towns had multiple cars in them and the drivers began to drive to each other’s farm or property within the range of their car, an informal sharing system of fuel between drivers and their drums of fuel was established thus extending the range of the gasoline car.

The first "drive-in" filling station, Gulf Refining Co. opened to the motoring public in Pittsburgh in 1913. Prior to this, automobile drivers pulled into almost any general or hardware store, or even blacksmith shops in order to fill up their tanks or drums. On its first day, the station sold 30 gallons of gasoline at 27 cents per gallon. This was also the first architect-designed station and the first to distribute free road maps. (wikipedia)

Hay was plentiful and availble everywhere, gas stations were not.

As a Mini-E driver it began with our home charging station or EVSE, as far as I could go and back again to my garage. Several months later an informal sharing system of chargers between drivers emerged. You can few that system here http://waterway4.com/mini-e/

This year, with the BMW ActiveE, several other plug in cars and a uniformed J1772 standard for the EVSE, a city wide roll out of public charging stations begins.

Let’s make sure we record for history the epochs and episodes of the electric car world as well.

Milestones such as making your own electric fuel from sunshine. Not all that far removed from the farmer who made their own ethanol 130 years ago.

Today you can make solar fuel for the equivalent of $0.40cents a gallon, not all that far removed from that day 1913 when gas was $0.27 cents a gallon. Give it another 10 years and solar fuel will be cheaper than gas 100 years ago.
Something to think about for the future, while looking in the rear view mirror.

San Diego County and Encinitas in particular, have emerged as a national hot bed of innovation and adoption for Electric Vehicles and for Solar PV installations. San Diego leads the nation in both categories. In my professional role as a County of San Diego Planning Commissioner and the Hwy 101 Coordinator for the city of Encinitas that makes me a very very happy boy :)

The Underground garage at Pacific Station has room for 250 cars/entries on two levels. This is a great event to bring your EV or to learn about E-Mobility from drivers and experts in muti modes of transportation. Plus you get to see a really cool film 'al freso' under the stars featuring three Mini-E Drivers, Tom, Todd and yours truly.

The event has already attracted the attention of the San Diego Union and The North County Times and several local papers and TV Stations.

WHEN: Thursday, May 26th from 5:30pm-7:00pm
WHERE: Pacific Station at 687 S. Coast Hwy 101
WHAT: Underground E-Mobility Show
Who: Presented by the Downtown Encinitas MainStreet Association, Stellar Solar and Pacific Station.

The Downtown Encinitas MainStreet Association (DEMA) is calling all electric and alternative fuel vehicles to downtown Encinitas on May 26th. DEMA will be hosting an underground E-Mobility show on May 26th featuring electric cars, scooters, bikes (electric and non-electric), plug-in hybrids and others. DEMA would like to welcome electric vehicle owners to showcase their vehicles and share their experience at the underground car show. The show will take place in the parking garage beneath Pacific Station at 687 S Coast Hwy 101. Come see cutting edge vehicles and the future of commuter transportation. This event is free to the public, come share information and learn about the technology of the future. If you are interested in bringing your electric vehicle to the show please email crhodes@encinitas101.com.

The evening will also include a free film screening and panel discussion on the Future of Mobility. The film and panel are presented by Stellar Solar and BMW. The film, “Wherever You Want To Go,” is the first release under BMW Documentaries—a new franchise dedicated to crafting original, thought-provoking and entertaining content. The film aims to take audiences to a place they’ve truly never been: the future. From the minds of some of the most influential scientists, academics, pioneers, and entrepreneurs of our time, this documentary paints a unique picture of technology, culture, cities, and our past, present and how it all relates to the future of mobility.
Join us for a fun night al fresco in downtown Encinitas.

Roll up on or in anything besides a gasoline car to the Cottonwood Creek Environmental Film Series in Downtown Encinitas. Ride a bike, skateboard, strap on your blades, use your feet, charge an electric car, use public transportation and get creative for a free raffle ticket. Hybrid vehicles do not count.
The event is free and open to the public, we hope to see you there!