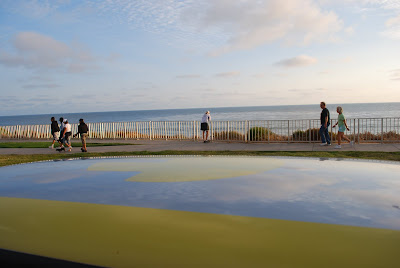 Zipping around in the cold California sunshine.
Mini-E #183 now has 22,500 miles on the odo.
Status: Incredibly fun, extremely reliable, cheap to drive, and I still occasionally burst out in spontaneous laughter, I am literally driving on sunshine with no emissions from the power source or the car for less than 50 cents a gallon. Best car in 32 years of driving.
Anxieties: Lots of them.
Giving Mini-E# 183 back to BMW, waiting for the Active-E, waiting for the Megacity, waiting for a plug in hybrid SUV with the first 40 miles electric, (are you listening BMW?) watching the San Diego Chargers play football, dry turkey on Thanksgiving.
Hopey Changey: I "hope" the 2010 “Tea Party” realizes that the original Tea Party of 1773 was made up of American Patriots of all political beliefs unified in freedom and liberty, not just “repackaged right wing republicans.” That the “Al Gores” of the world stop preying on fear and stop playing the American public for political fools and realize the world is not going to end anytime soon. Nice "change" on Ethanol, Al,
That 2011 brings new cars, new motive power and cleaner air.
Cheers!
Peder

Electric Cars, A Stadium and A Declaration. 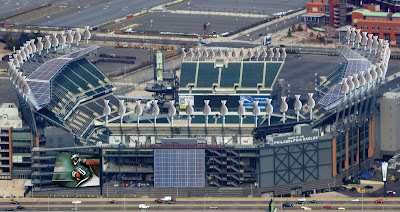 Welcome NFL and the Philadelphia Eagles to the renewable energy sustainability party!

Rush Limbaugh , George Will, and others pundits made comfortable by the status quo, have attacked General Motors and the Chevy Volt, They now have a new target. They can focus their “quills and shrills” at another American icon, the NFL and the Philadelphia Eagles.

They must be thinking how un-American that the Philadelphia Eagles seek energy independence and seek to provide clean renewable energy via wind/solar and cogeneration spurred on by U.S. policy.

Will and Rush the wealthy happy “Revisionist Tea Party” scribes, write wrongly about American companies, American cars, American people and no doubt in the near future, American Football.

I would suggest that EV Drivers, renewable energy providers, GM, and the NFL, who seek to end the taxing of Americans to pay for war cost on far away lands, who seek to end the enriching of foreign nations to protect our national weakness and dependency on oil, reflect the true values and intentions of the Boston Tea Party.

The parallels are remarkable.

The Tea party took place in Philadelphia, New York and Boston with American Patriots refusing to pay the illegitimate taxes imposed by the British, to pay for the costly price incurred by the British in the French and Indian wars concluding in 1763. The British miscalculated that American Colonists who loved their tea as a dependent staple of early American life, would choose to pay the tax as opposed to not having their tea.

In Boston the ships would not leave harbor without collecting their duty. On December 16th 1773, Tea from three ships was dumped into the harbor.

How wonderful that in the same Philadelphia, the NFL Eagles wrote their Declaration of Energy Independence on November 18th 2010.

As a conservation minded American, I would not suggest dumping the oil from three ships into the Boston harbor on December 16th 2010 in protest, as the environmental disaster would be unacceptable.

I would suggest however that both Rush Limbaugh and George Will, like the British, have miscalculated the American Patriots of 2010 who "need" their oil as a staple of American life, and would choose to “pay the tax” thus strengthen foreign countries economically, weaken and make more dependent the USA, and pollute our country as opposed to not having their oil.

We can, are, have and will become energy independent in this country. We will reclaim our Independence. We can do that by buying and producing clean domestic energy instead of importing oil and paying the “tea/oil tax” for wars afar.

Deep breath, “You can make your own fuel at home” cheaper and cleaner than buying it from the gas station.

Our cost to do that for our electric car a BMW Mini-E is $0.45 cents in solar electricity to drive the equivalent of a gallon of gas which is 25 miles. Said another way. Our cost to drive electric, 15,000 miles a year for 25 years will be $10,000. To drive a gasoline powered car the same distance and years would cost $85,000 for the gasoline.

We have been shouting from the rooftops to get America to open its ears to a path to energy independence and a cleaner environment. Now we can shout from the roof top of an NFL Stadium.

The Philadelphia Eagles have issued their Declaration of Energy Independence.

The Eagles soon to play in an energy independent stadium will give a National platform, on National TV, every football Sunday to renewable energy, and by extension (cord) the electric car.

That voice will be far more important and wide reaching than Will or Rush.

Like the Philadelphia Eagles, we have choices on how we power our buildings and how we power our cars. We can do both with clean renewable energy provided domestically. It's now our choice.

Welcome to the real “ Tea Party” and congratulations to the NFL and the Philadelphia Eagles!

Norby is a San Diego County planning commissioner. He and his wife, Julie, were awarded the 2007 SANDEE Award from the California Center for Sustainable Energy for the home they built in Carlsbad. They have driven 22,000 miles in an electric car powered by solar energy.
Posted by The Norby's at 10:08 AM 1 comment:

The “Noise” about the Mini-E 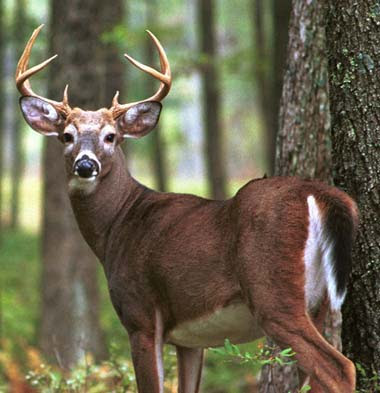 We humans are sensory creatures, what we know of our world is collected via our sight, smell, taste, touch and hearing.

For the electric car, our Mini-E, most of the "noise" conversation has been centered on the fact that we are very tuned into car noise. If there is a lack of noise from the car, that constitutes a hazard that needs to be mitigated by the addition of ( hard to believe it ) noise. We rely on our hearing as much as we do our vision in collision avoidance.

Imagine a deer in the forest listening for danger.

We rely on our hearing as we do all five of our senses in all aspects of our life. A lack of noise can be a detriment as in the case of low speed pedestrian safety, or it can be an improvement.

What does the electric car bring us in terms of improving our quality of life? A whole bunch is the answer.

1. Managing the noise in a shopping district is huge. If you're a pedestrian, a bicyclist, or a café customer enjoying an alfresco dining experience on an outdoor patio, a lower decibel level will greatly improve that experience. The quieter our “mainstreets” the more enjoyable-thus profitable-thus valuable they are. At low speeds up to 70% of the noise is from the drivetrain. It’s one of the reasons walking streets and malls are so popular is that they eliminate the largest noisemaker, the automobile. Imagine your favorite "go to spot" with the quietness of electric cars around you.

2. A typical town development pattern in a residential neighborhood consist of less expensive apartments or attached housing near the prime arterial and largest intersections. The further away from the traffic you go the more into the more expensive custom home neighborhood you get ebven though it's less conveiniant.

One of the biggest reasons is noise. The lower priced homes have more noise associated with them and the higher price homes less noise. If you remove the noise penalty and share traffic loads equally in a grid pattern, town development patterns would revert to basic principles of neighborhood quality instead of design principles centered on mitigating car noise. Imagine your home or apartment and the quietness of a neighborhood filled with electric cars.

3. “They live next to the freeway” That is seldom a compliment for a location of a home. My guess would be a home adjacent to the freeway would have a 30% lower cost than the same home one mile away in the same town. The main reasons? Noise pollution and emissions pollution.

According to the American Lung associations 2010 State of our Air Quality Report, it is unhealthy to live near a freeway. (Like I needed to tell you that) At freeway speeds half of the noise is from the motor and half is from road noise and wind. But imagine reducing the noise by 50% what an improvement that would be for those living next to a freeway. Imagine reducing the tailpipe emissions by 100% what an improvement that would be. To the extent we make our transportation quieter and emission free will be the extent that we reduce the penalty for living next to a freeway, It might even be healthy to do so in a few short decades.

4. We seek solace in nature, Central Park in New York, or the Rocky Mountains in the west. In this escape to nature we seek all of her gifts to our senses including quiet. Nothing tops a camping trip to a remote desert or mountain campsite where we can listen to the sounds of nature. Our conversations with each other are more meaningful, our nerves are soothed, and our spirits lifted by the experience. To the extent that we reduce the noise in our day to day world, we will increase our enjoyment of living and working there. Imagine your urban jungle populated by the quietness of electric cars.

5. Generally, luxury cars are quieter and they are more expensive. Why? In part because they spend a lot of money on sound dampening strategies to keep the noise of their motor and transmission away from the passenger cabin, thus a more enjoyable driving experiance. Imagine your car interior having the same quietness of electric cars.

Driving the Mini-E for 17 months, being able to hear the birds around our lagoon as I drive by the water, hearing a conversation of a couple as I wait for a light, and having a chat with my wife in the passenger seat is pretty amazing. The silence as I drive around is a huge improvements in my life. I think this is one of the reasons I and others love driving the Mini-E so much. I had a neighbor approach me a few months ago and say “do you know how much better it would be if all cars were as quiet as yours”

There are lots more reasons why the quietness of our electric cars will improve our day to day lives, The past several months the focus has been on the problem of no sound with the electric car. The benefits are far greater.

I’m interested in hearing from you some of your experiences as EV drivers and what ways you think the quietness of the electric car can improve a persons sensory experience.

I look forward to “hearing” from you