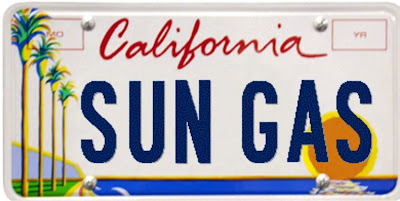 Wow, my own gas station......and a fun license plate for the Mini E!


A few new words are going to be needed, and a few eliminated, for the electric car driver. Let's start with "gas station" If there ever was a term to be done away with for electric drivers it is gas station.

Julie and I have had the wonderful life changing experience of living in a zero energy home that we built a few years ago. http://www.heronshouse.com/ Simple stated, a zero energy home is a home that generates as much energy as it uses. Accomplishing this is a mixture of about 80% design, low energy use appliances, passive solar, fixtures and lighting and a conservation oriented lifestyle coupled with solar P.V. that generates the remaining 20%.

With our selection into the Mini-E program and our positive inspection, we took the next logical step and ordered a "gas station" this will be 3kw addition to our 4.4kw existing system. In total we will be generating about 11,500kwh per year. This addition will supplement our existing 93% energy reduction with the 4.4kw system to 100% and provide an additional 2500kw for the Mini-E

Julie and I are in Carlsbad California and we are toying with idea of inviting Mini-E drivers in the LA and Orange county areas down to San Diego County for a "Mini" Vacation with their cars overnighting and recharging in our our guest house or guest rooms. Could be fun!

We thank our good friend Barry Cooper at Stellar Solar for their outstanding service and their assistance in helping us achieve energy independence.

Which way will we go?

There is a Moore’s law of sorts emerging for solar. That is for every doubling of annual solar P.V. production, there is a 20% greater efficiency and a reduction of 20% in cost per kwh of electricity produced. It is an undeniable technology based curve that is reducing in cost and accelerating as production ramps up.

The Solar P.V ability was observed as far back as the late 1800s.

In 1954 Bell labs produced a solar panel with 5% efficiency, the cost was millions.

Today, second market layer of thin film solar P.V with 6% to 10% efficiency, but cost down to $2kwh and dropping.

I’m sure you can argue a number or two in here depending on your advocacy, but the general point of declining price and increasing efficiency for solar P.V. is undeniable and in my opinion unstoppable.

This contrast with an opposite curve for extraction based fuels due primarily to extraction, importation, refining, delivery, storage, and retail delivery cost of the fuel.

Solar fuel has no extraction, refining, delivery, storage, and very small retail delivery (from rooftop to your panel) cost.

The two cost paths are about to cross in the next few years. We build our power plants to last 60-70 years (ours in Carlsbad California is from the late 40’s .) Guess which type of plant, renewable technology based, or fuel extraction based, we should be building?

....and some say that solar P.V. and other renewable energy sources, and its natural partner, the electric car won't work?

To them I simply say,

I'll show you my Ipod Nano with 2400 songs, if you will show me your record player.