As a fan for years, and future driver of the Mini-E, I have read and re-read media accounts of driving the Mini-E, I’ve scoured the youtube/mytube/ourtube/blogsphere and anywhere else for video snippets of the car being driven.

I want to learn, to know all about it, I want it to be here, I want to live in the future. I’m a guy, I love cars!

Would it be alien requiring a steep learning curve of new driving techniques? Would it be lethargic and an environmental compromise making me desire to get the hell out of the car and back into a real car. Would it be normal? Abnormal?

I drove the Mini-E today. My impressions were mostly different than what the magazine and news guys have said.

I’ll begin with the biggest impression for me. It was getting back in my G35 and driving home after driving the Mini-E and the sudden feeling of how old, cumbersome and incredibly complicated the car I was driving in and all that supports it was. I stopped to get gas on the way home, a mandatory monthly plan for me of $120 a month (at $2.60 a gallon) requiring three trips to the “convenience” station each month for a reload of the gas.

It stands against everything I wish to give to my child and those that follow.

Pumping the gas, I thought about the Mini-E soon to be in my garage, about the sun, carrying its rays to the solar panels, to the house, to the car. A conveyance system of millions of miles, of approximately 20 feet, distributed wealth creation for generations, a natural resource for trillions of years that billions of people could not exhaust even as gross consumers. Exhale……

The Mini-E is a friggin hoot to drive! Friggen is a highly technical term that the German engineers use. Sort of like Farfugnugen!

50mph onto the bending onramp, stay on the accelerator,. I get a little chirpy at the apex and coming out of the turn :) Torque steer is there, very strong, and the car pushes a bit, but hey, we will save that driving for the track and for a more controlled enviroment than the O.C. roads. Freeway speeds 75mph+ on Hwy 5, car cruises like a regular Mini. The overall feeling of the drive was how compatible the car was with normal driving, cruising parking lots at 10mph, city driving, freeway driving and enthusiastic driving. Very pleased with the regen, and how that was programmed. After about 30 seconds you get used to it, you can coast if you want by a lazy foot on the accelerator or lift and the regen brakes you in a similar manor to shifting down to second gear approaching a stop. It is effortless and at your calling. For ten minutes I touched the brake pedal exactly two times, once leaving the lot, once to avoid a driver gawking at the car and drifting into my lane.

I had to think about the gear selection. P,F,R, that’s all there is folks! It takes a bit for the mind to adjust to that. No slapping the tiptronic over and up and down like on my G35. I have owned some nice cars, a twin turbo Mazda Rx7 third generation, a Volvo S60R among others. I have never felt a car go from 40mph to 70mph like the Mini-E, It's a slingshot.

I have not had a ticket for 27 years, I am fearful that that my long distinguished career of lawfulness is about to be tarnished history!

The second biggest impression of the test drive was that I wanted a longer test drive. I am afraid a one year test drive will not be long enough, Hurry up and make a car like this that I can buy.
Please. 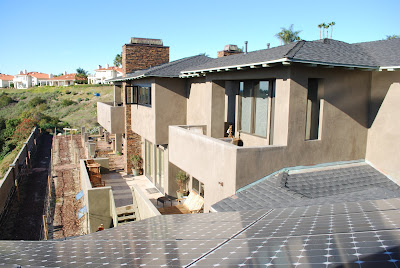 It's been an interesting few days here with our utility. At issue is that we were one of the first neighborhoods to underground our utilities in the early 70's. The process back then was called direct burial and the cable was called sita. The expected life of the cable was 30 years or around the year 2000.

Well they quickly found out that it was wrong way to do things and beginning in the late 70's they started to do under grounding of the utilities by putting a 4" pipe or conduit under the road which would allow them to "fish" new service through the conduit instead of having to trench open the whole road to get to the transformer on the other side of the street.

So back to our house, the utility said sure you can have the car and charging station, all you need to do is trench across the road and upgrade our direct burial sita (past its life expectency) to conduit. And don't worry the cost with traffic control and all included would be around 25k.

After they picked me up off the floor and put the heart defibrillator away, I regained consciousness and started to have a reasoned conversation with them. Their concern of course is that the cable would not handle the extra amperage. I asked them to look at my usage the past 18 months and their response was classic! Sir, you have no usage just the minimum bill, $3.85 for a meter and .17 a day for the service.

So the utility is fine with my car, and realizes I am on an SDG&E ev2TOU rate structure and Net metering :) which means I will be charging at night between 12am and 6am when the juice is super off peak and 1/2 the cost. During the day our strain on the sita cable is in the reverse direction supplying power to them at more than double the cost compared to night.

So my story ends well thanks to solar and an efficient home and a utility that was willing to work with their customer. Contracts are signed and installation of the wall box is around the corner.

It does illuminate an issue with electric cars and that is the fragile and often antiquated infrastructure that in many case cannot handle 220volt 40 amp service.

For mass adoption, this will need to be figured out. I think the utilities are looking at the electric car as their next big customer so hopefully both sides, the car companies and the utilities, can ease the transition for the homeowner so we can do no less than change our motive power to electric in our transportation system.

Tomorrow, I get to drive the Mini-E for the first time! I am very excited and looking forward to how the actual experience compares to the countless reviews I have read.

The fruit is always out on the end of the limb, the important decision is which limb is strong enough to climb out on!

Thanks BMW/Mini for blazing the trail. Tomorrow is going to be a blast.