How sad is this? 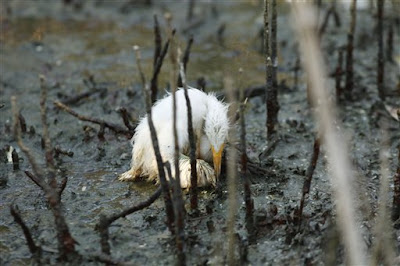 There is a much better way and it's not that hard to do.

Our home is called Herons House so the picture above strikes close to the heart.

The ethos statement of our home was written in 2005.

"We are blessed and we are grateful. We live in America, in one of the most beautiful parts of earth. We are chasing a dream...we are flying...

Up and down the coast, searching, downward looking, in estuaries and lagoons for a high perch to nest. A home is found, an old nest of years perhaps decades, overlooking the lagoon. It will provide a good beginning…. perfect for the Herons.

Julie and I are building our home, reusing an old house on a large lot as a good beginning, perched above the lagoon and Pacific Ocean. Like the Herons, we will walk lightly on earth, using the resources provided to us by nature, in harmony and partnership with our environment, with each other.

The Herons' House. Our house. "

In the construction of our home and the choice to drive an electric BMW Mini-E powered by solar PV, we hope we have remained true to those words. We live in a very sensitive habitat with Herons and birds of all manor on our land and in our lagoon.

I have rescued a Pelican, wrapped up in fishing line while kayaking, 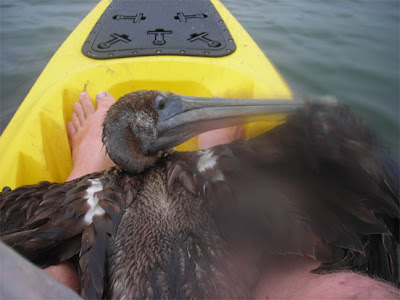 We have Herons visiting and flying by hourly 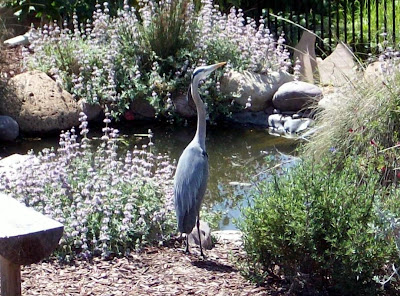 It is a paradise similar to the marsh lands of the gulf coast. I can't imagine the picture of the dying Heron being our lagoon. 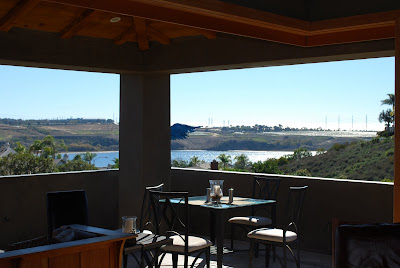 Living and driving on electrons powered by renewable energy can end this madness of repetitive environmental disaster.

I will never buy a gasoline car as long as I live.

There is a much much better way to do this. 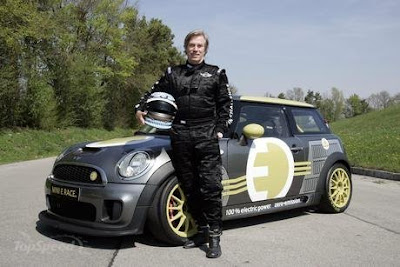 Finally, some video of the Mini-E driving in a way that I like to drive. ( sometimes )

Below is a the entire video of the Mini-E race and their sub 10 minute run at Nürburgring.

Now I know the first driver was a pro but there was visible moisture and less than ideal conditions. Tomorrow a Prince of a driver, HRH Leopold, and well trained at that, will take Nürburgring on and see if he can beat the time. Of course he can!

I will humble submit that someone with 14,500 miles of seat time in the machine, that used to be a damn good go kart driver winning most of his races can do even better!

Just refer to my bloodline as Red, White and Blue blood!

Fly me to Germany BMW, I'm ready to race!

Man I love this car!

Oil is not stupid, we are. 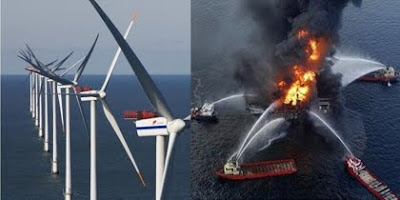 A departure from blogging about Mini-E #183 to tell a related story. It is about my awakening to living with the earth and renewable energy.

For nearly 15 years I owned a summerhouse on the Danish island of Rømø. Rømø is on the west coast of Denmark, near the border with Germany.

"You can see Germany from my Kitchen window" to paraphrase a famous quote from a certain U.S. female politician.

The German island of Sylt lies a few hundred meters south of Rømø and yes you can see it from the island.

The summerhouse was constructed of rock from the island, had a thatched roof made from the wheat stalks that grow in the northern part on the island, and was situated on a few aces of beautiful natural lingberry fields on the leeward side of the island. The windward side is 8 miles of beach and wind.

In the late 1980's, early 90's all of the island residents (about 8,000 of us) as well as others on the mainland and other Danish islands were polled to find out if they would support a 20% higher utility cost to build an offshore wind farm. To to be self reliant and ween Denmark, once 100% dependent on imported energy, off imported energy. The carrot was that once built the energy cost would be level with no or little increases in the future.

A few years later, the first off shore wind farm in the world was built just a few kilometers north of Rømø. A decade later and after much environmental analysis, Horns Reef two was built.

Here is a video of Horns Reef one.

Today the Horn's Reef project, about 15 miles offshore, provides power to over 300,000 Danish houses. Denmark is 100% energy independent, with renewable wind energy approaching 30% of it's total portfolio. The Danes found oil and wind in the North Sea. The Danes are seeking to have 50% of their total energy from wind, bio fuels and other renewable's by 2030. They lead the world in wind high tech with nearly 50% of the worlds windmills and have created 100,000+ jobs in the global wind energy biz.

If Horns Reef should ever suffer a catastrophic failure, with 100% certainty I can say that the pollution of the entire west coast of Denmark would not happen.

Shifting gears a bit, (which you don't do in the Mini-E) and bringing it back locally at the home owner level .

Remembering that vote on that Danish island over a decade ago, we decided to "vote" with our own home and pocket book by installing a solar P.V. system to use a renewable resource that is abundant in our part of the world, sunshine. Our home produces 100% of our energy requirements with renewable and non polluting solar energy for our home and cars.

It's not that hard to do America!

"Study nature, love nature, stay close to nature. It will never fail you."

Nature won't, government and big oil most certainly and repeatedly will.

Nothing could be more Republican, Democratic, Libertarian or Green, than a country or a citizen that produces their own energy, is self reliant, less expensive, and environmentally cleaner than we are today.

We are too smart to behave in this stupid way.

In the words of a Saudi oil minister, "the Stone Age did not end for lack of stones"

My thoughts and prayers to those in the gulf states and on the coastline as they deal with this unprecedented failure and violation of their lives, livelihood and will being.

It truly makes me ill as I know, I know and live, a better way forward.

With much sadness and anger,

Peder Norby
Posted by The Norby's at 8:53 PM No comments: